Model and actress Fukushima Rila, cast as a gynoid geisha in Ghost in the Shell (2017).

On September 21st 2016, five ten-second teaser trailers for the new Ghost in the Shell film debuted as part of prime-time television show Mr. Robot. The teasers can be viewed here.

AltSciFi has focused several blog entries on the spectacle of how Hollywood has systematically whitewashed this classic Japanese cyberpunk anime. We do this partly to highlight an equally perplexing issue: why do so many people in Hollywood’s potential target audience seem to condone and make excuses for it?

Anime characters depicting Japanese people have always been illustrated with stereotypical “gaijin” features. Everyone has their own pet theory as to why, but ultimately none of those theories matter.

Take another seminal anime from the 1990s, Ninja Scroll. All of the main characters are either ninja warriors or samurai. The story is set in medieval Japan. And nearly all of the characters look like they come from somewhere in Europe. (In fact, the few “Japanese-looking” characters appear as exceptions to the rule, much like Ghost in the Shell’s Chief Aramaki.)

Does a cast of nearly all-white ninja and samurai make any sense at all in medieval Japan? No, of course not, and it doesn’t make any more sense in a future Japan. Japan would rather spend billions to construct robots (that look like photorealistic Japanese people) than invite immigration to ease the looming population crisis. 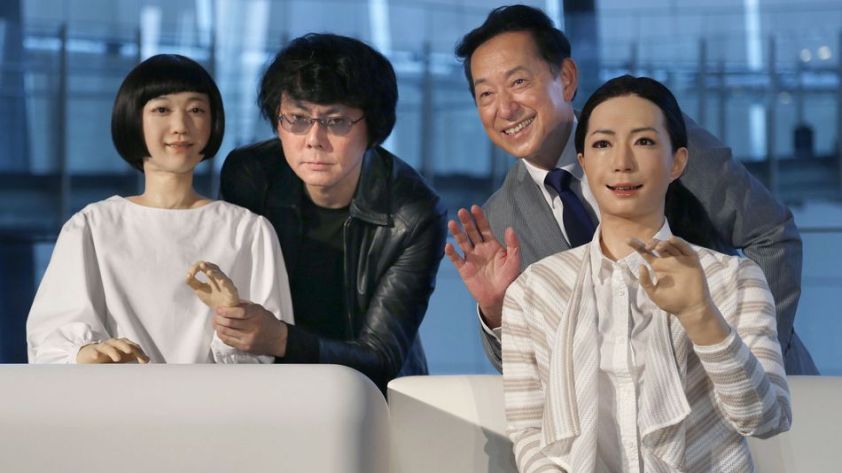 Conveniently, that target audience is also quite vocal on social media sites like Reddit. Below you’ll find the most common excuses for whitewashing Ghost in the Shell, recited ad infinitum on Reddit and decisively refuted here. The real question of this entry is whether or not your own biases are visible to you. Read more and find out.

1. Hollywood is all about money, so of course they cast a popular white actress (Scarlett Johansson) as Motoko Kusanagi. No point complaining about it.

This is like saying “discrimination exists, so it’s fine”. The fundamental attribute of bias is that the biased thinker cannot see their own flawed thinking, and therefore ignores the damage caused by it.

In the case of Ghost in the Shell, the bias simply reinforces Hollywood’s tendency to whitewash as many roles as possible. This leads to a situation where inequality in Hollywood has remained unchanged for almost a decade.

2. All I care about is if it’s a cool action flick.

Congratulations, your bias is showing! Now imagine being Japanese-American. Watch yet another Japanese story appropriated by Hollywood executives as an excuse to cast the hottest white starlet in a “cool action flick”. You would see things a bit differently, because the racial/ethnic bias of being non-Japanese would no longer distort your thinking.

Ghost in the Shell gives Hollywood a perfect excuse to cast within ethnic boundaries. They could have said, “hey, we have this young Japanese actress named Fukushima Rila. She proved herself capable of action in The Wolverine (2013) and she speaks perfect American English. We also have Kikuchi Rinko, who starred in Pacific Rim (2013) and was also great in that action role.” Instead of offering a Japanese actress — already available and accessible to Hollywood — the role, they gave it to yet another white actress.

If you don’t care, then congratulations. Your bias is showing, and you are the reason why Hollywood keeps giving lip service to diversity without taking any real action to change.

3. Kusanagi isn’t really supposed to be Japanese, anyway. Look at her. She’s obviously white (or “non-ethnic”).

Ghost in the Shell is set in Niihama City, Japan. All of the characters are Japanese — particularly Kusanagi (hint: her real name is 草薙素子). Given that the characters are intentionally named, the only white main character in the anime could be Batou (“bateau”, French for “boat”). If anything, GITS should be set in Hong Kong, as that was the model for Niihama City. Considering the characters’ fondness for San Miguel Beer (see images below), the story might even be set in the Philippines. 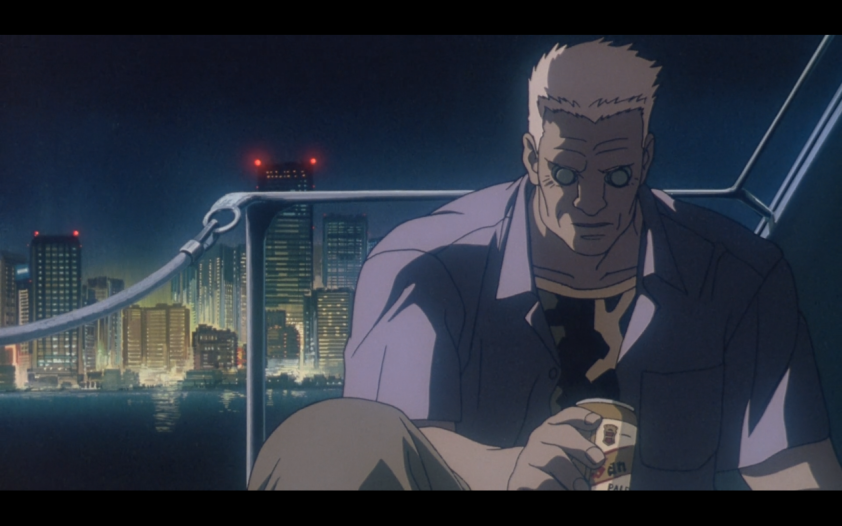 Images of Ghost in the Shell’s Motoko Kusanagi and Batou drinking San Miguel Beer, popular in Hong Kong and the Philippines.

Japan is an extremely ethnocentric place, and that it is unlikely to change. For example, the police blatantly profile members of the Japanese Muslim community of 100,000 people, in some cases following them in plain sight. When confronted, the police simply say that they’re “acting in service of national security” and continue as if nothing is wrong. Police and government surveillance of Muslims has been defended and upheld as constitutional in Japanese court.

Now ask yourself: is there any likelihood that Japan’s elite anti-terrorism commandos, such as those from Ghost in the Shell, would ever be assigned cybernetic bodies that look like white people? They would stand out like, well, white people in Japan. That would make their jobs (especially for Kusanagi, as she frequently operates undercover) vastly more difficult, if not impossible. Unless you accept the “whiteness” of anime characters as a stylistic quirk and nothing else, it literally makes no sense to cast white people in a Ghost in the Shell film.

Scarlett Johansson as Motoko Kusanagi in Ghost in the Shell (2017).

This is undeniably true, and is also the last refuge of someone who couldn’t be bothered to think about racism in popular culture. “It’s just fiction” completely and deliberately misses the point of there being different human cultures around the world, all of whom use fictional stories (religion, mythology) to communicate their historical and cultural values. There is no such thing as “it’s just fiction”, just as there’s no such thing as a human being without culture.

How could Hollywood (or an independent film) accomplish a “real”, non-exploitative live-action Ghost in the Shell?

The only way that Hollywood could have “whitened” Ghost in the Shell in a non-racist way is by setting the story somewhere else entirely. For example, they could have shifted the location to Belgium as a new hub for anti-terror activity around the world, then brought in a few Japanese agents from the NAICHO [2]), the new “Japanese MI6 (or CIA)” agency. In a European context, a predominantly white cast would have made sense. 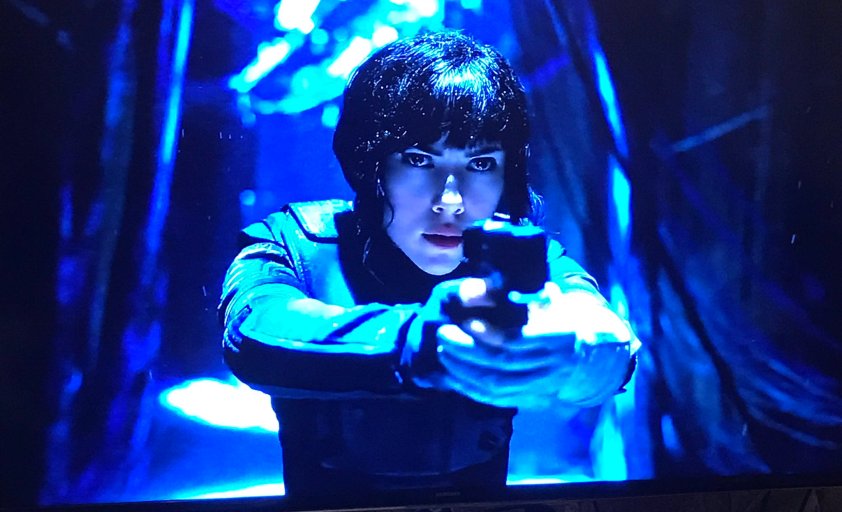 Scarlett Johansson as Motoko Kusanagi in Ghost in the Shell (2017).

An even better option would be to simply find Japanese actors and create a legitimately Japanese film — or an international production set in Niihama City (i.e. futuristic Japan) that at the very least stars a Japanese actress as Motoko Kusanagi.

With every successive announcement of new images and trailers for Ghost in the Shell (2017), the racial biases of Hollywood become harder to ignore. What is less apparent, however, is the bias of audiences who cheer for whitewashing, or naively make excuses for it. Ghost in the Shell is a perfect opportunity to highlight both Hollywood’s cultural cynicism and the casual blindness of those who endorse such cynicism, paying millions at the box office for yet another whitewashed story appropriated from another culture.